Some of the most amazing wild animals I’ve seen in my life has been in some sort of rehabilitation center. At first I thought I would prefer seeing them in the wild but on second thought I realised that some animals, like sloths, and manatees, are quite hard to spot in the wild.

I had the opportunity to visit the CREA rescue center near the jungle city of Iquitos, and I was blown away by the amazing experience. Not only do they do fantastic work with the animals, but they also provide the opportunity to see some very special animals and learn a bit about their lifestyle. Although nearly all the animals come from a sad background, usually as pets or as illegally traded animals, the centre gives them the opportunity to learn to be wild again and give them a second lease on life by releasing them back into their natural habitat.

Along with the important rehabilitation work, the CREA center is also involved in various projects to educate the community about the importance of conservation of natural resources, and sustainable hunting and fishing practices.

The center visit starts with a video that makes visitors aware that buying illegally traded pets and animal products contributes to the problem of the trafficking of exotic animals and the terrible practices associated by it. The video and more information can be seen on their website There’s also a very informative video on their main sponsor, the Dallas aquarium, about how they use tourism to subsidize conservation.

Our knowledgeable guide explained that the rehabilitation process has four phases. At first the animals are monitored in isolation to ensure they are healthy. After that they are socialised with the other animals of the species to learn to integrate with nature. The penultimate part is an area without human interaction, before the last part, release into the wild.

It is here where we had the fantastic opportunity to see the special creatures. A couple of manatees were happily munching away at their home grown water plant while us humans were learning about some special features of these adorable animals, like the fact that they are friendly and kind animals, a trait that sadly lead to their endangered status.

We also got to witness a couple of otters that are learning to fish, different kinds of tortoises and turtles, including a pre-historic turtle that managed to survive, likely due to its great camouflage. To be clear, I mean a species of prehistoric turtle, not an individual, although some turtles do get really old! 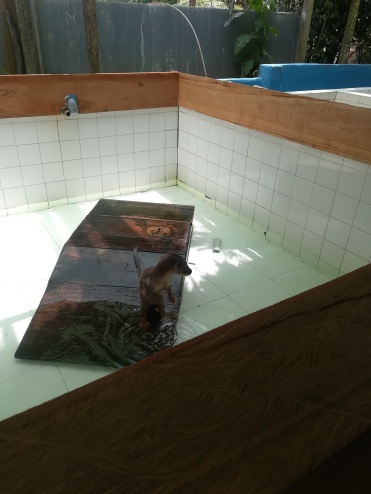 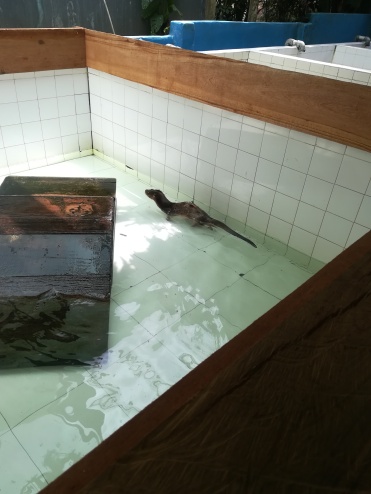 Among the residents were also a sloth, eating lazily at its carrot, before taking a snooze with his legs in the air!

The monkeys we saw here were in cages as they are still receiving some treatment for the ailments they arrived with, but that doesn’t mean they don’t get up to shenanigans! The wooly monkeys have a padlock on their door, because apparently they like to open their cage and that of their cousins, to run amok. Talk about monkeys on the loose!

One of my personal favorites was Mickey the Tigarillo, a leopard print relative of the jaguar. As pretty as she is, she gets anxious when there are a lot of people around and unfortunately she will not be able to be rehabilitated. Another stark reminder why wild animals remain in the wild!